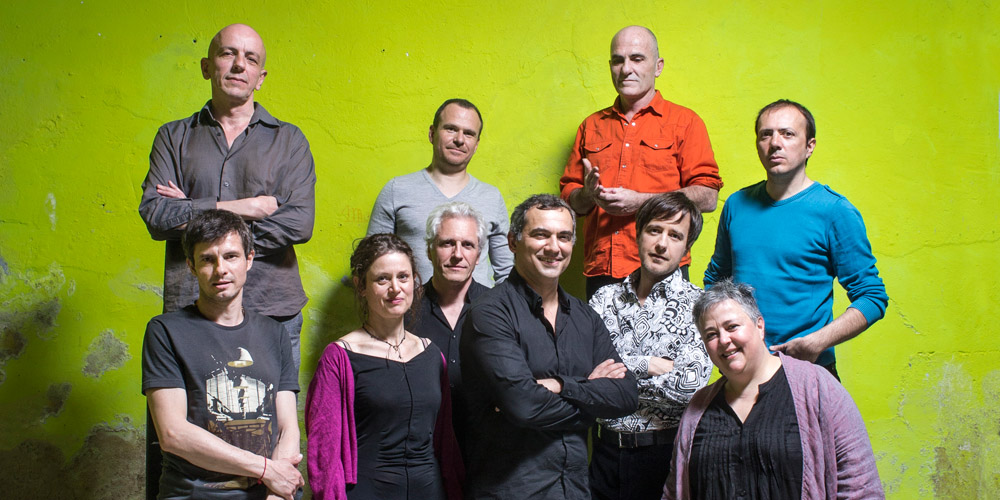 Ever since it was created in 1994, and in line with its many transformations, the Loudaszak ensemble (“Emerging Light” in Armenian) has been leaving its mark across Claude Tchamitchian’s protean itinerary; the resulting structure is like a well-hidden secret architecture – its authentic spinal column… This group is one of variable geometry whose members are constantly changing according to the different sizes and instrumentation Lousadzak assumes; over the years it has recorded a series of albums, each one more and more inspired, but each opening onto its own kind of lyricism, based on the major forms developed over time to include natural narrative and theatrical aspects too. Lousadzak in 1994, Bassma Suite in 1999, Human Songs in 2006 count as essential milestones in the double bass player’s discography, thus constituting what must unquestionably be the best introduction to anyone wanting to be initiated into his universe.

In 2016, the first performance of the ambitious project Need Eden marked the birth of Acoustic Loudsadzak, the latest version of the ensemble’s new metamorphosis into a group of exclusively acoustic instruments, as its name suggests. But it doesn’t hesitate to follow in the wake of previous formulae by type of composition, the way the sound mass is handled and the interaction between musicians: this new group offers music that is a synthesis of its accumulated experience whilst opening a new chapter in its common adventure, thanks to its “instrumentarium”. It can now venture onto new territory, adopt a new idiom, explore freshly imagined sound spaces, all of which were only introduced either obliquely or subliminally up to this point. Thus the orchestral idiom, based on various flowing instrumental modules that redistribute the group dynamics around several key posts, allows Claude Tchamitchian to plunge without reserve into the realisation of his personal compositional dreams, calling on the influence on his language of the erudite Western tradition. His main form of expression has earned him the description of a chamber player, who, through his blends of valuable timbres as well as much more contemporary forms, recalls in particular French music from the first half of the 20th C. The contemporary aspect lies in his use of repetitive patterns to activate and organise what becomes textured sound in motion, with solo instrumental and vocal interventions, the latter omnipresent more than ever before, the true centre of Tchamitchian’s universe, that he surveys and reveals all through these three suites of intimate spaces, undisclosed to him until now. And so he continues to re-invent himself in his music, opening up a highly original “cross-track”, certainly one of the most remarkable on the contemporary jazz scene.